Isobel Carr [Presenter, Friday evening “Hooch through History: Revolutions Around the World” spirit-ual tastings flight] is a bestselling author of historical romance and has presented historical clothing and food workshops at conferences and colloquiums all around the world. Her 40-plus years as a historical re-enactor have concentrated her research on recreating clothing and food as closely as possible. Sometimes this means brewing her own ale, finding a source for isinglass, figuring out what eighteenth century gin really tasted like, or hunting down a sixteenth century waffle iron (all of which is worth it when it comes time to sit down at the table). To find out more about Isobel and her books, visit www.isobelcarr.com.

Bruce Herbold [Co-presenter, Readers Festival “Dance with Men in Kilts”] began Scottish Country Dancing in 1976 in Berkeley and has pursued it avidly ever since. He began teaching SCD in 1981. In both dancing and teaching, he emphasizes the social aspects of Scottish Country Dance, especially the joys of teamwork and social interaction.  He has co-taught a teacher training class and has taught at workshops in Victoria, Vancouver, Calgary, Cleveland; and California–where he currently teaches regular Monday and Thursday night classes. The music, sociability, ingenuity, and fun of Scottish social dance continually inspires him.

Larry “Corky” Palmer [Dance Host: Saturday Evening Afterparty] has been teaching historic dance since 1991, and has been dance coach of the Alexandria Assembly for the past 26 years. Together with his wife, Cindy, Mr. Palmer has performed at venues to include Colonial Williamsburg, The Library of Congress, the White House, the Kennedy Center, and the Smithsonian, as well as historic sites in and around the Washington Metropolitan Area.  He has been dancing master for Gadsby’s Tavern Museum in Alexandria, Virginia, since 1992 leading dancers at the annual Birthnight Ball to celebrate George Washington’s birthday, annual Jane Austen balls with the early 19th century theme, and colonial, regency, federal, and Civil War dances around the mid-Atlantic region. Mr. Palmer is currently a teacher of fourth-graders in the Fairfax County Advanced Academic Program. Mrs. Palmer retired from teaching after serving 42 years in Fairfax County Public Schools.

Bethanne Patrick [Readers Festival Guests of Honor Interviewer] is a writer, author, and literary critic whose work appears frequently in The Washington Post, on NPR Books, and in TIME magazine. She also writes for The L.A. Times, Poets & Writers magazine, and Lit Hub, where she is a contributing editor and columnist. Her books include An Uncommon History of Common Things (National Geographic), An Uncommon History of Common Courtesy (National Geographic), and The Books That Changed My Life (Regan Arts/Phaidon). She is currently working on a memoir for The Counterpoint Press. She lives with her family—and far too many books—in Northern Virginia.

Join our e-mail list for the latest news about the 2021 conference!

The Historical Novel Society is a literary society devoted to promoting the enjoyment of historical fiction. This website is dedicated to the North American region of the society and the bi-annual North American Historical Novel Society Conference. HNS welcomes readers and writers from all around the world, and information about joining the society can be found at the main HNS website.

Mr. Shaara was a Guest of Honor at the 2019 HNS Conference.

“A powerful novel inspired by our nation’s past . . . a tale of individual loves, longings, and losses bound together by the healing balm of hope.” —New York Journal of Books 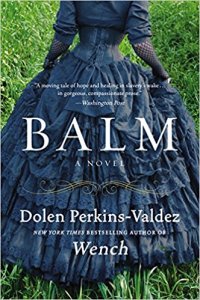 Ms. Perkins-Valdez was a Guest of Honor at the 2019 HNS Conference.